Shin/Alex refers to the endearing example of friendship displayed by Shin Chen and Alexander Wen, students of Gakuen Hetalia. It is hands-down the most popular pairing, judging from the size of the underground fanbase and amount of surreptiously circulated supporting material.

This legendary combination first occured as a misprint by the revered deathbybroccoli-san during a chat session in December 2010 (Log can be found here). Careful analysis can reveal the implications of the original terminology where Alex/Shin as been discarded in favour of the superior man through the conviniently attended catalyst of Kaneeli-kun and ForteBlues-chan and the supporting prescence of SparrowHunter08-san and MizukiAme-san. Also, this is where the significant motif of Skinny Jeans and the hilarious quote, "I am willing to be your prince in shining army," arises.

Evidence has been gathered from a number of reputable sources.

A refined selection from "Brainbleach: You will need it" [*]

Alex: *nose bleed*
Shin: *stuffs tampon up his nose*
....
Alex: get on your knees
Shin: *gets roses out of skinny jeans*
Alex: and propose to me~
Shin: *goes on one knee*
Shin: Alex.
Shin: The princess of my soul.
Shin: The skinny jeans to my butt.
Shin: With this bouquet.
Shin: *pulls ring out of shirt*
Alex: *blushes*
Shin: And this ring.
Shin: Will you.
Shin: Be my waifu?
....
Alex: Please be gentle with me *ukefaceplz*
Shin: *semefaceplz* Of course.

Jussi: YOU ARE UNDER FUCKING ARRESTTTT!!!

[*]portions have been omitted (and edited) due to their traumatising nature, please click on the above link to find out more. 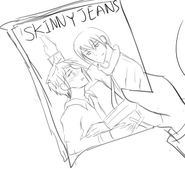 Sneaky paparazzi shot of the doujin 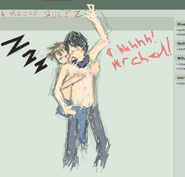 Getting it on in the chatroom

All relationships start out gentle...

Ohhh damn look at that tension 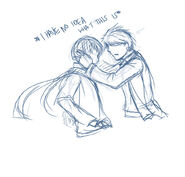 Brocs draws them the other way around ;D Such a versatile pair 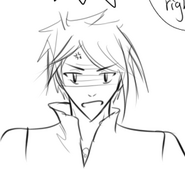 A hot tempered tsundere for a cold guy... together they can make steam //shot 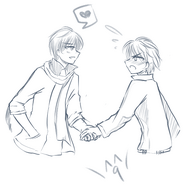 Sparks are flying here CAN'T YOU SEE IT

The rain sets such a mood for umbrella sharing...
Add a photo to this gallery
Retrieved from "https://gakuenhetalia.fandom.com/wiki/Shin/Alex?oldid=4311"
Community content is available under CC-BY-SA unless otherwise noted.